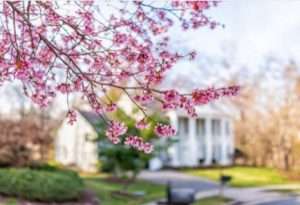 Originally known as Peach Grove, Tysons, VA, got designated as Tysons Crossroads after the end of the Civil War. History has it that William Tyson bought a piece of land from Lawrence Foster. Tyson served as the region’s postmaster from 1854 to 1866.

As in the early 1950s, Tysons had remained a quiet and rural intersection dotted by only a small number of stores. The most significant establishment was a fruit and grocery store operated by Mr. Tyson. William would sell apple cider and apples from one corner of his property. Things here remained quiet and still until 1963, when Tysons underwent a major change, becoming a huge commercial and urban area. This was as a result of contract awards at the interchange of Route 123 and Route 7.

In 1962, the Board of Supervisors from Fairfax County Virginia approved Tysons Corner Center (known as Tysons Corner Shopping Center then). The region was planned to sit within a 150 acres tract of land in a sort of triangle bordered by Leesburg Pike, Chain Bridge Road, and the Capital Beltway. When it opened in July 1968, it was proclaimed as the biggest enclosed mall on the globe.

In the years that followed, an influx of tech companies brought tons of new office buildings as well as hotels in the region. Tysons recorded quite some rapid growth, that it has been a topic of an array of studies. Tysons serves as Fairfax County’s main downtown, playing host to one-eight of all retail space and a quarter of all office space in the entire county. Interestingly, Tysons only sits on 1% of the county! Today, Tysons is an edge city that is highly auto-oriented, with it facing competition only from Arlington and Dulles.

Another major city approval was the 2012 Arbor Row, a 762,000-meter mixed development containing both residential and office high rises, underground parking, and ground-floor retail shops. In April 2013, Fairfax County approved the Scotts Run South Station, a 2,042,160-meters development, a construction comprising of 17 buildings. These include 6 residential and office buildings, some ground-floor retail spaces, as well as a hotel. This space was expected to be bigger than the Reston Town Center.  Today, Tysons is considered Fairfax County’s downtown, featuring Northern Virginia’s largest office space. There are various political groups and private developers with great plans to expand Tysons corner into a huge urban center by the year 2050.

And while you’re doing your research on the history of Tysons, Virginia, if you’re in need of a custom home builder, August Homes is here to help. Schedule an appointment to meet our home builders. We look forward to hearing from you!